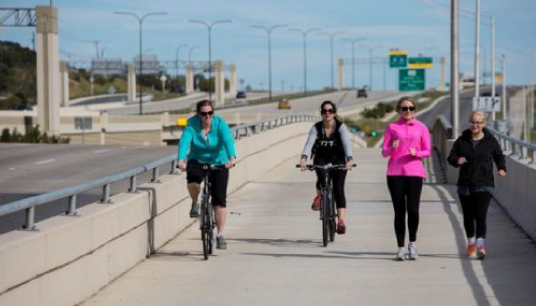 Shared Use Paths and Projects

A visit to the City of Austin's Urban Trails project web site will reveal what looks to be exciting developments for cycling and pedestrian protected pathways. We've done our best to give you status of projects, proposals, and completed paths.

The Austin to Manor Trail will be a 5-mile long trail beginning near Daffan Lane and ending in the vicinity of Ben E. Fischer Park in Manor, Texas. Phase 1, which opened in fall 2014, is 2.5 miles long and extends from Daffan Lane to Lindell Lane. Phase 2 is also approximately 2.5 miles long and will pick up near Lindell Lane, ending near Ben Fischer Park. The project will include bridges, trail heads, and other trail amenities and is expected to be constructed of concrete 10' in width with 2' grass shoulders.

The Country Club Creek Trail (CCCT) is a multi-phase trail project located in Southweast Austin. It was originally identified and partially constructed by the South East Austin Trails and Greenways group. Currently the Urban Trails Program is working to design and construct the CCCT from Burleson Road to Ventura Road and is planning for Phases 2 and 3 from Burleson Rd to Oltorf St.

From the Eastlink Trail website: “EastLink is a series of proposed improvements to connect 4.7 miles of trails in Central East Austin – from Bartholomew Park to Lady Bird Lake. Ultimately EastLink can become a treasured recreational asset, as well as an alternative to driving. This is a citizen-based initiative to repair old paths, and in some cases build new paths for pedestrians and cyclists. EastLink will help connect people to places in safer, healthier ways.”

Funded for Preliminary Engineering Report, by the 2016 Mobility Bond, the La Loma Trail will provide East Austin residents and the neighbohoods near the proposed trail with crucial connectivity to the Southern Walnut Creek Trail and Eastside Memorial High.

In order to address traffic congestion in the MoPac corridor, the City of Austin is partnering with the Capital Area Metrolpolitan Planning Organizations and the State of Texas on the MoPac Mobility Bridges Project. The project includes 3 phases totaling approximately 2 miles of bicycle, pedestrian, and motor vehicle mobility improvements in the MoPac corridor from near Loop 360 to Southwest Parkway. The first two phases of this project are complete.

Staff is studying the feasibility of a 0.8 mile long urban trail and associated stream improvements of Shoal Creek from Fifth Street to 15th streets. Specifically, the project will study the feasibility of accommodating not only a 12-foot wide path for active transportation and recreation users of all ages and abilities; but also how the path will link to the on-street bicycle and sidewalk network; include amenities and unique features; create a safe, context-sensitive, environmentally sustainable destination, and preserve and improve upon wildlife habitat.

This project will provide an accessible ADA-compliant bicycle and pedestrian trail that will close a gap between a bank on west side of Shoal Creek and the existing trail. The project also includes the relocation of a wastewater line out of Shoal Creek, a chilled water line, stream bank stabilization using reinforced wall structures, trail lighting, and the design and installation of a shared use bridge to span Shoal Creek at 4th Street and Rio Grande with the other landing near the site of the former ECC Building. This project will provide not only access to chilled water and wastewater utilities, but also an all-ages-and-abilities urban trail connection for the citizens and visitors of Austin. Once all aspects of the project have been constructed, it will allow for bicycle and pedestrian access across Shoal Creek and along the Shoal Creek Trail. The lighting anticipated as part of this project will be consistent with lighting used for the Central Library Project, and Block 24 project, located just south of the Shoal Creek Trail Gap Project. The stream bank stabilization will be conducted in keeping with the City's goals for the Lower Shoal Creek Plan for continuity of bank stabilization.

Project Location: From 5th Street to West Avenue for the trail, lighting, wastewater line relocation and stream bank stabilization. The bridge planned for this project will be placed to span Shoal Creek with one landing at 4th Street and Rio Grande and the other landing near the site of the former Austin Energy ECC Building.

View a map of the project.

This project proposes to construct an urban trail from just south of E. 12th Street to MLK Station extending the existing trail system along the Boggy Creek Greenbelt. This project will serve multiple neighborhoods and regional stakeholders in the area. The trail will connect to the Sustainable Food Center community garden, a public meeting and community space, other recreational uses, as well as provide a direct connection to the MLK Metrorail station. This project is called for by the Rosewood Neighborhood Plan (2001), MLK TOD Station Area Plan, and is located within an Imagine Austin Center. The City of Austin was awarded 2015 Transportation Alternative Program and Capital Metropolitan Transit Authority ¼ cent funding for the construction of the trail.

The Hill Country Conservancy (HCC) and the City of Austin are working together to design and build the Violet Crown Trail (VCT), a regional trail system that will begin at Barton Springs Pool in Zilker Park and wind more than 30 miles south into Hays County. The VCT will connect neighborhoods with parks, pools, libraries, schools and shopping centers and create new terrain for hiking, running and pedaling.

The YBC (Y at Oak HIll to Barton Creek) Urban Trail would connect much of the Oak Hill to the Barton Creek area of Austin. Not only will the trail be a great asset for connectivity in this area, it will also build upon the existing Mopac Bicycle and Pedestrian Bridges and provide a safe, off-street route from Oak Hill to Downtown Austin for people of all ages and abilities in this region. The YBC trail has received 2012 Bond Funding for preliminary engineering and design. Construction funds for this project have not yet been identified.