Equally at home on your favorite road loop, a long climb, a road race, or a crit. Plus, it's fun to ride in the dirt. It's a road bike that dreams of being an all-road bike.

A Year On The BMC Teammachine

So it was really only around 10 months, not a full year. But between rides on a few other bikes, I covered just over 1400 miles on the 2021 BMC Teammachine SLR 01 Three. And it was that purported “road” bike that made me want to get my own “all-road” bike.

What’s an all-road bike? Imagine a road bike–what some would call a road race bike, with typical road bike manners and body position, but with clearance for wider tires than you might otherwise run or have been able to run in the past. Think 32s, formerly the domain of cyclocross bikes, tires that may now seem small when set aside what many run on their gravel bikes, but that look monstrous when viewed against 25s often seen at local road races and other road rides.

But the Teammachine is not an all-road bike. It can’t really run actual gravel tires. It is billed as a road race bike, designed for speed, efficiency, and all-day, in the peloton comfort. After all, the Teammachine is the model of choice for BMC-sponsored teams like the World Tour’s AG2R and the new continental team Tudor Pro Cycling. But it does offer clearance for 30s mounted to the stock wheels. And when so equipped the Teammachine transforms from road racer to “light” gravel smasher, good for more manicured and groomed unpaved sectors and gravel courses. And so I ran my demo Teammachine SLR01 Three with 30s, freeing me up to cruise the Ann and Roy Butler Hike and Bike Trail around Lady Bird Lake and the unpaved sections of Shoal Creek with ease.

Ten years is a long time for a singular road bike design to stick around. Often, bike models go through wholesale redesigns after a few years. The Teammachine has proven to be a bit more iterative. Perhaps reflecting a certain Swiss sensibility, or perhaps an acknowledgement by BMC that they know they have a good thing going. Dropped seatstays, now ubiquitous, started with BMC. They offer added compliance without added components or moving parts complicating things. BMC was a pioneer of the D shaped seat post, another way to add compliance that while proprietary, isn’t necessarily adding complexity. And then there’s the consideration of aerodynamics for what isn’t BMC’s official aero bike (that’s the Timemachine Road, FYI) with things like the ICS (integrated) or ICS2 (separate) stem and bar set-up, tidying up and hiding cables and hoses from the front end and the shape of the frameset’s leading surfaces like the headtube, the fork crown and legs, and the water bottle cages. Yes, the Teammachine comes with specially designed bottle cages, smoothing the airflow from frame to bottle. And yes, you can still use other cages should you so choose for some reason. 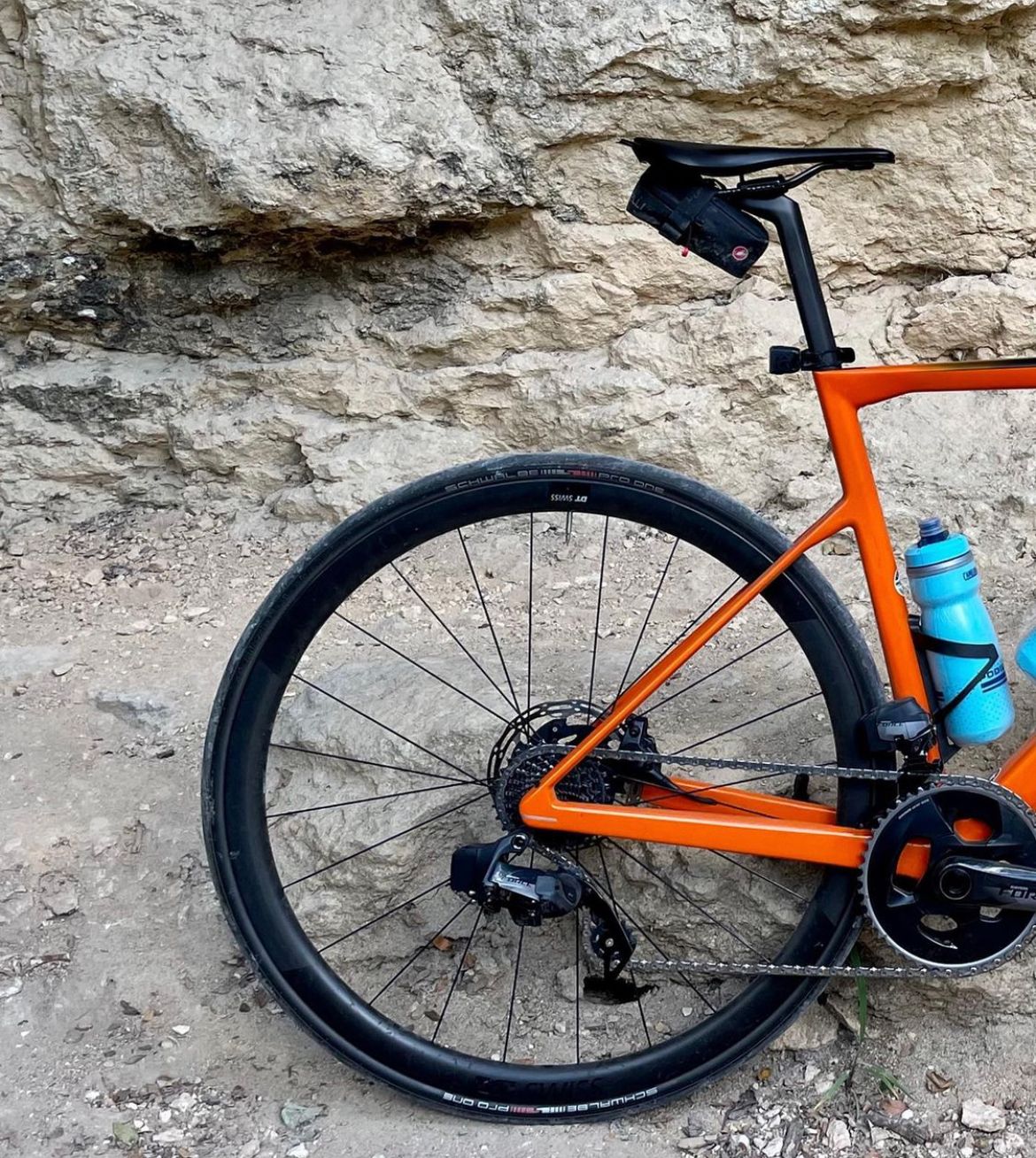 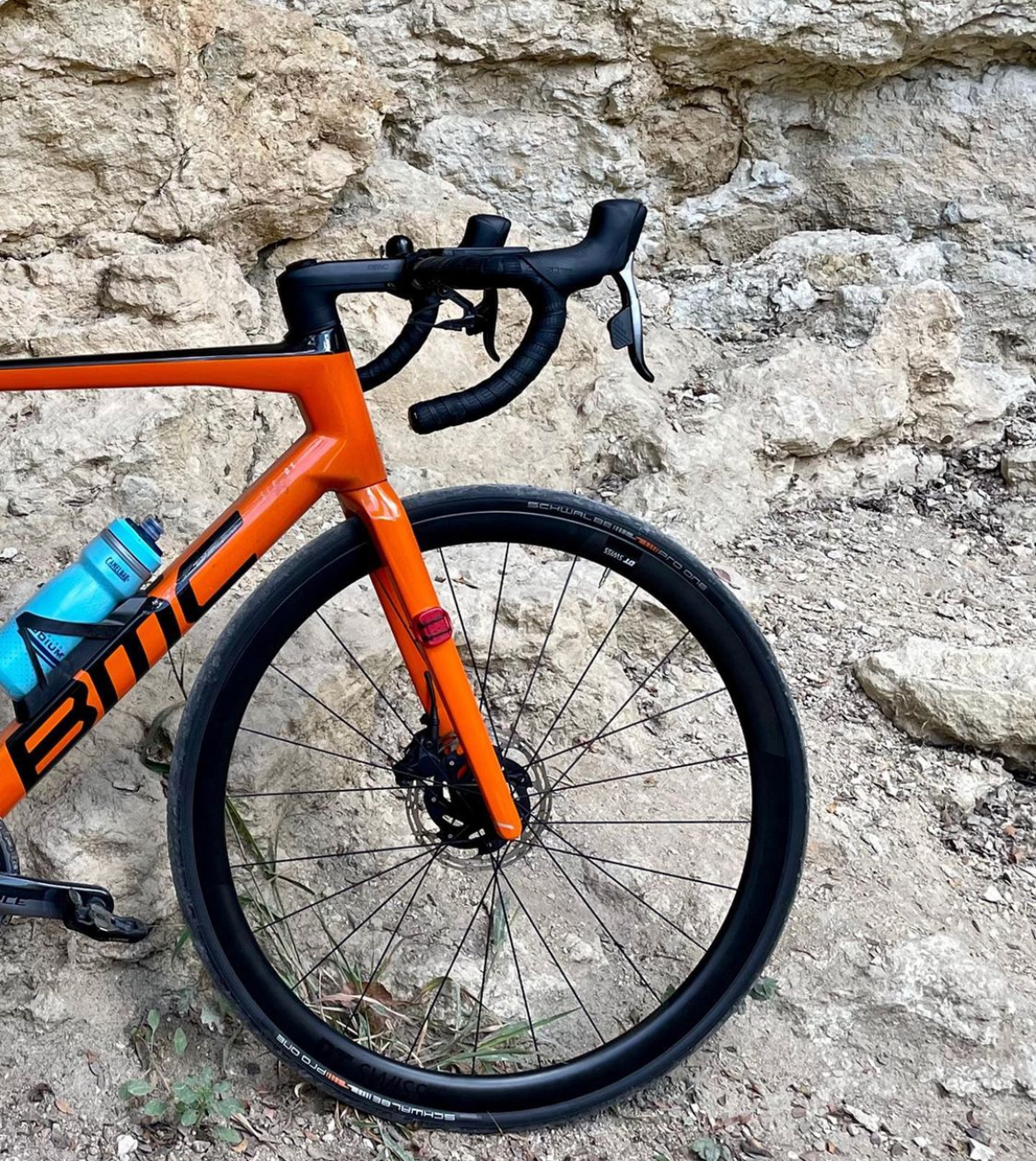 The Teammachine's back end features dropped stays, found on most bikes today, the design started with BMC and easily adds compliance. The front end shows off the clean ICS2 stem/bar. The higher end Teammachines feature a one piece bar/stem combo for an even sleeker appearance.

The Teammachine comes in basically two carbon models. The SLR01, which uses a higher grade carbon rendering the frameset as light as possible while still hitting stiffness and compliance numbers targeted by BMC, and the SLR, a more budget conscious carbon layup that still yields a respectable weight and, more importantly, an equally sublime ride. There's also the Teammachine ALR, which features an aluminum frame and carbon fork.

For the carbon bikes, aside from the SLR01 vs SLR designation, riders have their choice of builds, designated by the trailing non-numeric number designation. For my long-term demo, the 2021 Teammachine SLR01 Three, that meant a SRAM Force AXS kit and DT Swiss PRC 1600 DB Spline carbon tubeless ready wheels. With the aforementioned ICS2 bar/stem combo on cable management duty with it’s out-front computer mount, the BMC D-shaped post, Aerocore cages, and Vittoria rubber, the only other bit of non-BMC kit was the included Fizik Anteres Versus EVO R5 saddle. The saddle’s name length did not add to my enjoyment of it and after some time of trying to give it a fair shake, I swapped to a preferred one.

Riding the Teammachine SLR01 was a bit of a revelation. It had been some time since I spent more than a single ride on a carbon bike and here I was given the chance to ride this thing as much as liked. And I did! To and from the shop, on a few rides with Violet Crown, super secret shop rides, at what was the Driveway Series (RIP), and at the Lago Vista Road Race. I rode with friends and solo, and yes, I rode some gravel on the Teammachine.

The revelation came at how well-mannered the Teammachine is. Oftentimes race bikes can, although it’s less common now, ride harshly. The handling can feel overly sharp, what some might call twitchy. The bars can feel too far away and too low out of the box forcing a rider to compromise on fit, sometimes to the detriment of the bike’s and its designer’s intended ride quality.

None of that was true with the Teammachine SLR01. The Teammachine’s geometry put me in what felt like a well-balanced, neutral position. Yes, I could have dropped the bars a bit, but being a demo, I didn’t want the next rider to be married to my fit–or an overly aggressive cut steerer. On the bike I felt connected to it. I was “in” it rather than perched atop. That sensation lends itself to cornering well. With a sturdy outboard foot planted and a touch of countersteer, the Teammachine glides around turns at whatever speed you’re comfortable at. Lower speed steering is confident too with the bike acting much like a point-and-shoot camera. Look where you want to go, and the Teammachine goes there. Such was the ride quality that the Teammachine was equally happy sitting on the back of a masters crit and a spin down the Southern Walnut Creek Trail, a northeast-bound paved path here in Austin, heading towards Manor, TX. Yes, it’s race bike oriented. It wants to go fast. But the ride quality is so sublime that even when not at race pace the Teammachine just sort of disappears under you. Stomp on the pedals though, like say up the climb on the counterclockwise loop at Lago Vista and the bike jumps in response, as if to say “I’m ready, LFG!” 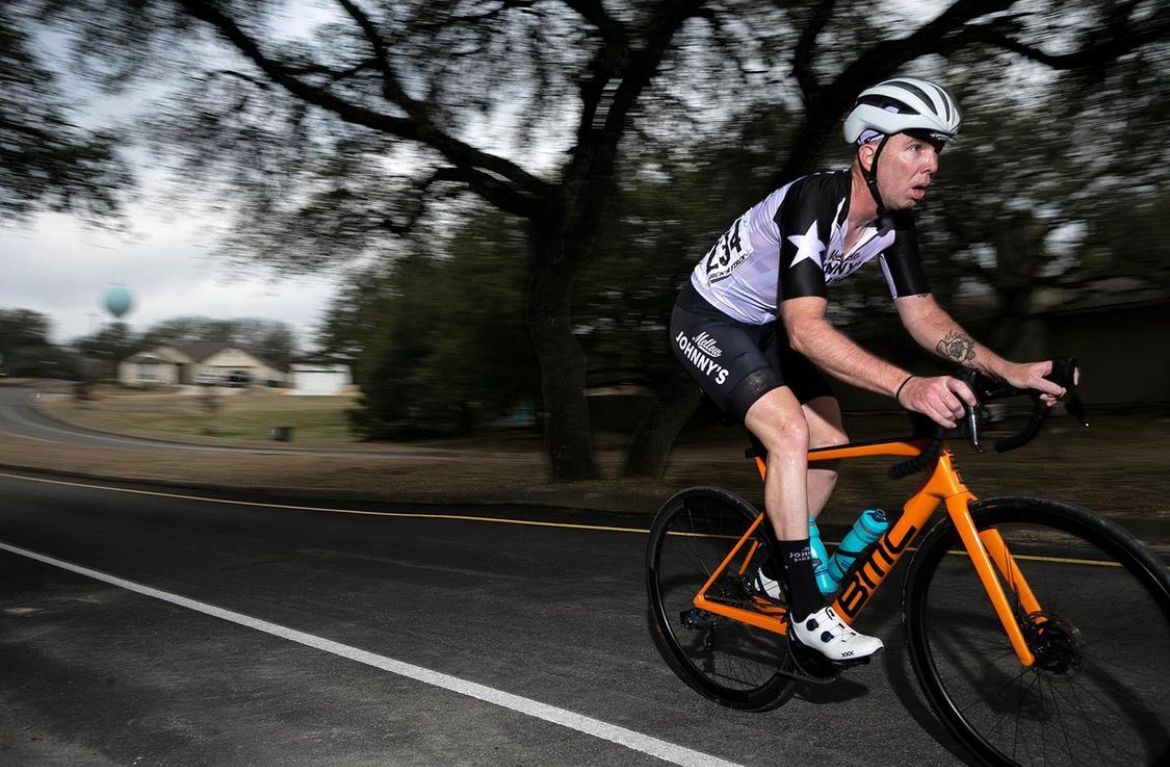 The Teammachine in race mode, captured by Jim Hicks. https://jahicks.zenfolio.com

Managing my output on the Teammachine SLR01 Three was SRAM’s Force AXS kit. This was my first extended foray into the world of electronic shifting. I’ll start by saying that more than once I ran the rear mech battery dry, forgetting to charge it a couple of times. No matter on SRAM’s set-up since the front and rear derailleurs run the same battery. A simple swap and I was back in business riding with 12 gears to choose from out back (a task made easier by the cranskset’s large ring being a manageable 48t).

I found the hood shape of SRAM’s kit quite nice, on par with the comfort of the TRP levers on my single-speed gravel bike. But nitpicking, the SRAM drivetrain is fairly loud. A chat with the mechanics here and it’s likely the chain. But whatever the reason, I found the noise a bit annoying when I focused on it. Luckily bike riding is full of stimulus input and there are other things to focus on.

More troublesome was an occasional tendency of the chain to drop to the inside. I finally managed to sort out how this was happening. Running cross chain–big ring and largest cog on the cassette (yes, I know you shouldn’t run cross chain)--and letting off of the pedals, or especially a short backwards pedal, and the chain would unship to the inside. My pedaling idiosyncrasies aside, chains shouldn’t drop when the drivetrain is installed properly and adjusted to spec if you ask me. Nonetheless, once the cause was sorted, it was easy to avoid. And not running cross chain likely saved me a bit of wear on the chain.

Other nitpicks about the Teammachine? A bit of frame noise when riding over rougher surfaces. I’ve noticed this on other carbon and aluminum bikes. Cables or brake hoses rattling can be remedied by a good mechanic. But larger diameter, thin walled tubes–part of what makes a super bike like the Teammachine a superbike–tend to have an “echo” effect. Like I said, it’s a nitpick, not a dealbreaker.

So the Teammachine is a road bike through and through. But I liked riding it so much that I took it to “unintended” tasks, like the hike and bike trail, Hommanville Trail out towards Lytton Springs, and other gravel roads on Austin’s outskirts. And it was fun. It was fun to have a responsive, comfortable bike that felt very familiar–having ridden road bikes for years–but riding it on unpaved surfaces. The bike rode the same–fast, comfortable, albeit with a bit of drift on a couple of loose turns. And having that fun made me wonder, “is the Teammachine a ‘light’ all-road bike in disguise, or just a road bike that dreams of becoming a true all-road bike?”

A Teammachine SLR01 built to run up to 35s or even 38s would be a quiver killer, a “one bike to rule them all” bike. BMC, let me know when it’s ready.

Daydreams aside, we have a number of Teammachines in stock at the shop, including a nice preowned 58 cm Teammachine. Come through and check them out. 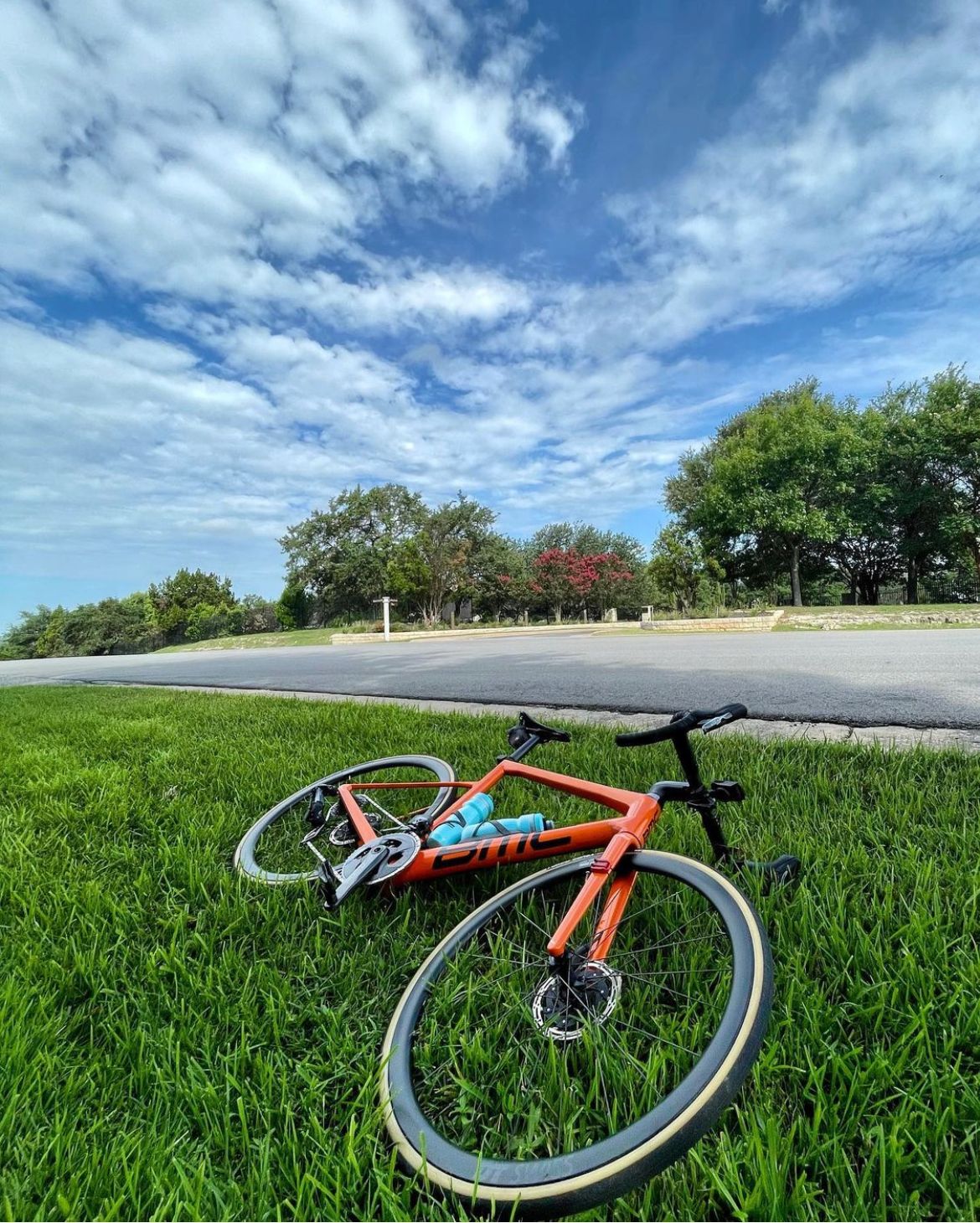 SIGN UP TO GET THE LATEST ON SALES, EVENTS + MORE