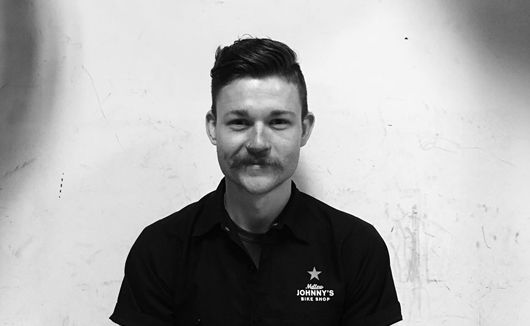 Every so often, we like to take time out from our routine to tell you about the great folks that make Mellow Johnny's what it is. One such chap: bike mechanic, Jonathan Neve. He sat down between repair tickets with MJ's sales guru, Andre Chelliah. We learn about everything from his upbringing in the Midwest to his appreciation of the fashion of the British Regency Court.

You've been in the industry for a couple years now, can you give us a summary of your cycling related work?

I stumbled into the industry shortly after I started commuting by bike for the first time as an adult, while I was living in Nebraska in 2009. I got my foot in the door at a local bike shop where the service manager took kindly to me and let me help build bikes before the build-out of the space was finished. I worked there for pizza and beer for a few weeks before they hired me on full time. Two years later I took over managing the shop after countless hours of rapid growth, race support/team development, hundreds of custom builds and wheel builds, and a tremendous amount of community outreach and volunteering.

I also fell in love with racing in the Midwest cyclocross and mountain bike racing communities during that time. Everywhere we went, there were so many happy and fulfilled people putting on races, showing up for races and helping cheer their friends on while setting up and tearing down courses. I was hooked. After a few years my partner and I decided it was time to move on and it coincided with a grad school acceptance letter that steered us towards Texas. We had met some locals during a previous visit to Austin and spent some time with Texans at Cyclocross Nationals in Boulder, so we were fortunate to be able to hit the ground running in a new city thanks to new friends. I started at Mellow Johnny's in August of 2014 and have had marginally dirty hands and Di2 firmware update notes on the brain ever since. The service department here really is second to none. I'm so thankful I get to spend every day working with the group of people we've put together.

What was your first experience with cycling?

My dad used to drag all his tools out onto the driveway on Saturday mornings and we'd play "bike shop", getting lube on chains, airing up tires and unpacking and repacking hub bearings. I was maybe 5 when we started doing this and as I got older bikes were a constant companion, whether going to get sodas at the gas station down the road or going on bike camping trips in middle school and junior high, with the biggest backpack imaginable (I shudder at the memory), loaded full of car-camping-weight gear and entirely too much food.

What's the most memorable ride you have ever been on?

Most memorable? Shoot. I wish I could tell you the five most memorable rides, and how awesome the showers and shower beers I had afterwards felt. This spring I rode 200 miles in one day with my good friend Cole, through four Texas state parks, in 15 leisurely hours of snacks, good conversation and miles and miles of completely isolated gravel roads. We rode with cattle through an open prarie, crossed through a swamp, saw some owls, and drank a lot of Mexican Coca-Colas at gas stations. Neither of us had any mechanical issues or flats, which was miraculous. That is one of my favorite days on the bike to date.

You've got a fleet of nice bikes! Do you have a favorite and what sets it apart from your other rides?

I don't have a bike I'm not thrilled with, but I really like that I can jump on my daily driver and take it anywhere. It's a Surly Disc Trucker with knobby-ish tires, fenders and a basket to hold flowers and groceries and a Surly front rack whenever I need to make bigger trips to the grocery store (aka every three days...). I also have a Swift Industries Zeitgeist saddle bag that I'm keeping a tube, a rain jacket and warm gloves in during wintertime commuting. Sometimes I ride it with a drop bar, but most of the time it's a flat bar shredder that has always been more fun to ride than I ever thought a heavy steel touring bike could be.

It is known that you are a man of sophisticated taste and style! Mind if we ask you some of your "favorites"?

Well, shucks. Thanks. I'll just dive right in, then.

Hairstyle: In the coiffed and painstakingly prepared style of George Bryan "Beau" Brummel (1778), a dandy dictator of men's fashion in the British Regency Court. He would often spend up to six hours getting dressed before he left the house, which is usually how I feel as I'm getting ready for winter training rides.

Type of Pasta: Cavatelli with pesto and sundried tomatoes