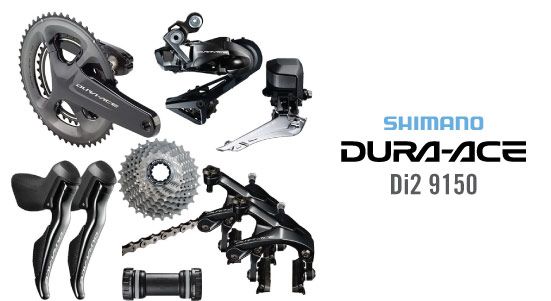 The long-time leader of the groupset universe unveils the 10th edition of industry leading Dura-Ace, with some heavy updates to the Di2 version.

The next evolution of the industry-leading Dura-Ace features many additions that address ergonomics, power, and customization.

- The crank arms are much bigger as is the outer chain ring to improve stiffness and power transfer.

- There are larger shift buttons, new lighter rim-brake calipers, a new rear derailleur design with a more angular look, and if you examine closely you can even spot the new tooth profile on the chain rings and sprockets.

- The shifter ergonomics get a remodel by becoming streamlined to feel more like a traditional shifter, losing the bulk and extended reach of typical hydraulic disc brake levers. The new levers will also allow for contact point adjustment, something only previously available on mountain bike brake levers. The new technology allows for very small adjustments to the control and movement of the lever.

The next progression in the Shimano's electronic groupset story is 'Synchro', otherwise know as 'Full Synchro Shift'.

The system provides an almost automatic response in shifting based on your cadence and the position of the chain on the front chain rings and rear cassette.

Once again the technology comes from the mountain bike world, synchro shifting has been used on Shimano's XTR groupset. The concept is based around an automated control over the front shifting based on the rear gear. As you shift up or down the cassette, the 'Full Synchro Shift' system will decide whether you should be in the large or small front chain ring. The XTR groupset gives an audible beep to let the rider know when a shift is going to happen, which although unconfirmed, appears the new Dura-Ace will too.

Another nice feature is the ‘Semi-Synchro’ shift mode which will automatically change the rear gear after a front shift to the best position so you can maintain an even cadence. For example, a shift into the small chain ring would result in a move down the cassette to increase the gear and smooth out the usually clumsy shift process.

Synchro shifting can be fully customized or turned off through an upcoming app if you prefer manual control.

As mentioned above, hydraulic disc brakes are available on the mechanical and electronic groupsets with a new look and feel.

The new-look rotor is perhaps a glimpse into the future of road cycling with Shimano making a conscious effort to create a road specific rotor that provides greater heat dissipation and improved aerodynamic characteristics which will improve performance.

An updated rear derailleur now caters for a larger gear ratio. The new derailleur named 'Shadow' (first seen in Shimano's mountain bike ranges) has a low profile and sits further in-board for improved aerodynamics and less chance of getting bent or damaged in the event of a crash. A 11-30T cassette can now be used too, featuring 11-12-13-14-15-17-19-21-24-27-30T sprockets.

A new chain ring and sprocket tooth profile has also been introduced to better suit a wider gear ratio.